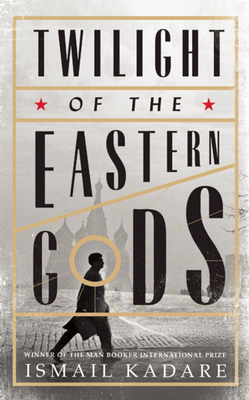 Twilight of the Eastern Gods

In 1958, Kadare was selected to pursue his writing and literary studies as a graduate student in Moscow at the prestigious Gorky Institute for World Literature. Twilight of the Eastern Gods is Kadare's fictionalized recreation of his time spent at this "factory of the intellect," a place created to produce a new generation of poets, novelists, and playwrights, all adhering to the state-sanctioned "socialist realist" aesthetic. During his time at the Gorky Institute, a kind of miniature Soviet Union where writers from deepest Siberia, Kazakhstan, and the Caucasus all came to study, Kadare was caught up in the furore over Boris Pasternak's Nobel Prize win, when the Soviet Union demanded that Pasternak refuse the foreign, bourgeois award, or be sentenced to exile. Kadare's time at the Institute, the drunken nights, corrupt professors, and enforced aesthetics are fictionalized in a novel that entwines Russian and Albanian myth with history. Twilight of the Eastern Gods is a portrait of a city and a story of youth, disenchantment, and the incredible importance of the written word.

Ismail Kadare was born in Albania in 1936. His first novel, The General of the Dead Army, established him as a major international voice in literature. His work has since been translated into forty languages, and in 2005 he became the first winner of the Man Booker International Prize, for "a body of work written by an author who has had a truly global impact." He is the recipient of the highly prestigious Principe de Asturias de las Letras in Spain. David Bellos, Director of the Program of Translation at Princeton University, is also the translator of Georges Perec's Life A User's Manual, and the author of the celebrated book on translation, Is That A Fish In Your Ear?. He has translated seven of Kadare's novels.
Loading...
or support indie stores by buying on