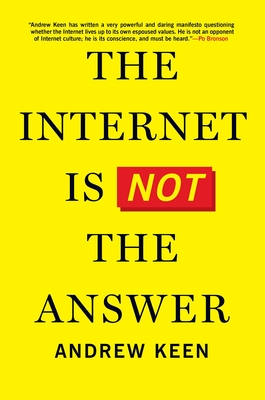 The Internet Is Not the Answer

“In the midst of celebrating all that the Internet has done for us comes this thoughtful invitation to consider the negative impacts of its presence in our lives. Keen, himself a veteran of the tech industry, reveals the behind-the-scenes workings of the Internet with input from others involved. His best message, however, is that with consideration and the application of care we can still shape a future society that utilizes the strengths of the internet while not allowing it to overwhelm us and turn us into robotic servants of the very technology that was designed to help us gain freedom and growth as human beings.”
— Linda Bond, Auntie's Bookstore, Spokane, WA
View the List

The Internet, created during the Cold War, has now ushered in one of the greatest shifts in society since the Industrial Revolution. There are many positive ways in which the Internet has contributed to the world, but as a society we are less aware of the Internet's deeply negative effects on our psychology, economy, and culture. In The Internet Is Not the Answer, Andrew Keen, a twenty-year veteran of the tech industry, traces the technological and economic history of the internet from its founding in the 1960s through the rise of the big data companies to the increasing attempts to monetize almost every human activity, and investigates how the internet is reconfiguring our world--often at great cost. In this sharp, witty narrative, informed by the work of other writers, academics, and reporters, as well as his own wide-ranging research and interviews, Keen shows us the tech world, warts and all, and investigates what we can do to make sure the choices we make about the reconfiguring of our society do not lead to unpleasant unforeseen aftershocks.

Andrew Keen is an Internet entrepreneur who founded Audiocafe.com in 1995 and built it into a popular first generation Internet company. He is the currently the executive director of the Silicon Valley salon FutureCast, the host of a long-running Techcrunch chat show called "Keen On", a columnist for CNN and a regular commentator for many other newspapers, radio and TV networks around the world. He is also an acclaimed speaker, regularly addressing the impact of digital technologies on 21st century business, education and society. He is the author of the international sensation Cult of the Amateur, which has been published in 17 different languages. His most recent book is Digital Vertigo.
Loading...
or
Not Currently Available for Direct Purchase