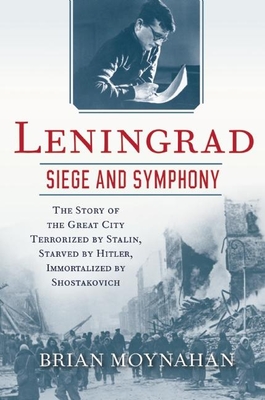 Siege and Symphony: The Story of the Great City Terrorized by Stalin, Starved by Hitler, Immortalized by Shostakovich

Shostakovich's Seventh Symphony was first played in the city of its birth on 9 August, 1942. There has never been a first performance to match it. Pray God, there never will be again. Almost a year earlier, the Germans had begun their blockade of the city. Already many thousands had died of their wounds, the cold, and most of all, starvation. The assembled musicians - scrounged from frontline units and military bands, for only twenty of the orchestra's 100 players had survived - were so hungry, many feared they'd be too weak to play the score right through. In these, the darkest days of the Second World War, the music and the defiance it inspired provided a rare beacon of light for the watching world. In Leningrad: Siege and Symphony , Brian Moynahan sets the composition of Shostakovich's most famous work against the tragic canvas of the siege itself and the years of repression and terror that preceded it. In vivid and compelling detail he tells the story of the cruelties heaped by the twin monsters of the twentieth century on a city of exquisite beauty and fine minds, and of its no less remarkable survival. Weaving Shostakovich's own story and that of many others into the context of the maelstrom of Stalin's purges and the brutal Nazi invasion of Russia, Leningrad: Siege and Symphony is a magisterial and moving account of one of the most tragic periods in history.

Brian Moynahan's books include the much-praised William Tyndale: If God Spare My Life. As a foreign correspondent, he covered fighting in the Far and Middle East and Africa, and was latterly the European Editor of the London Sunday Times.