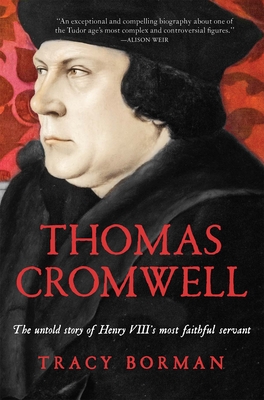 Thomas Cromwell has long been reviled as a Machiavellian schemer who stopped at nothing in his quest for power. As Henry VIII's right-hand man, Cromwell was the architect of the English Reformation, secured Henry's divorce from Catherine of Aragon and plotted the downfall of Anne Boleyn, and upon his arrest, was accused of trying to usurp the King himself. But here Tracy Borman reveals a different side of one of the most notorious figures in history: that of a caring husband and father, a fiercely loyal servant and friend, and a revolutionary who helped make medieval England into a modern state. Born in the mid-1480s to a lowly blacksmith, Cromwell left home at eighteen to make his fortune abroad. After serving as a mercenary in the French army, working for a powerful merchant banker in Florence at the height of the Renaissance, and spending time as a cloth merchant in the commercial capital of the world, the Netherlands, Cromwell returned to England and built a flourishing legal practice. He soon became the prot g of Cardinal Thomas Wolsey and then worked his way into the King's inner circle. As Henry's top aide, Cromwell was at the heart of the most momentous events of his time and wielded immense power over both church and state. His seismic political, religious, and social reforms had an impact that can still be felt today. Grounded in excellent primary source research, Thomas Cromwell gives an inside look at a monarchy that has captured the Western imagination for centuries, and tells the story of a controversial and enigmatic man who forever changed the shape of his country.

Tracy Borman is England's joint Chief Curator of Historic Royal Palaces and Chief Executive of the Heritage Education Trust. She has written five previous books, including the highly acclaimed "Elizabeth's Women." She lives in London.
Loading...
or
Not Currently Available for Direct Purchase