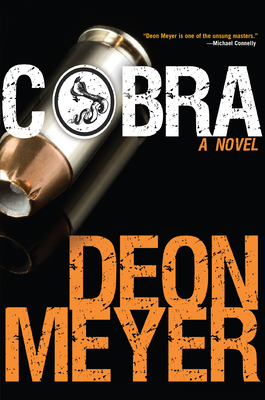 "Deon Meyer is one of the unsung masters." --Michael Connelly

At the start of this masterful thriller, a famous English mathematician is kidnapped and his two bodyguards are killed at a guest house in the beautiful wine country outside Cape Town. It's clearly a professional hit, and the spent shell cases offer a chilling clue: Each is engraved with the head of a spitting cobra.

Meanwhile, in the city, a skilled thief is using his talents to put his sister through college. But he picks the wrong pocket, grabbing the wallet of a young American woman delivering something very valuable and dangerous to South Africa. The thief not only becomes the target of the Cobra, but unwittingly has in his possession information that could cause an international outcry. And it's up to Captain Benny Griessel and his elite investigation team to find the pickpocket and track down the Cobra as the novel hurtles toward a brilliant, heart-stopping finale. Cobra is a first-rate thriller from a writer at the top of his game.

Deon Meyer is an internationally acclaimed, prize-winning author of crime novels, including "Blood Safari, Thirteen Hours," and "Trackers." His books have been translated into twenty languages. He lives on the western coast of South Africa.
Loading...
or
Not Currently Available for Direct Purchase