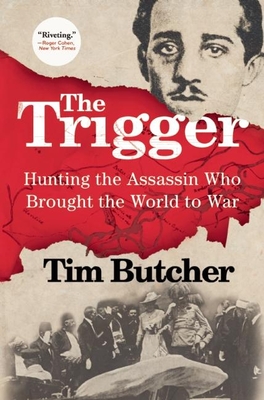 Hunting the Assassin Who Brought the World to War

On a summer morning in Sarajevo almost a hundred years ago, a teenager took a pistol out of his pocket and fired not just the opening rounds of the First World War but the starting gun for modern history. By killing Archduke Franz Ferdinand, the heir of the Austro-Hungarian Empire, Gavrilo Princip, started a cycle of events that would leave 15 million dead from fighting between 1914 and 1918 and proved fatal for empires and a way of ruling that had held for centuries. The Trigger tells the story of a young man who changed the world forever. It focuses on the drama of the incident itself by following Prinip's journey. By retracing his steps from the feudal frontier village of his birth, through the mountains of the northern Balkans to the great plain city of Belgrade and ultimately Sarajevo, Tim Butcher illuminates our understanding of Princip-- the person and the place that shaped him--and makes discoveries about him that have eluded historians for a hundred years. Traveling through the Balkans on Princip's trail, and drawing on his own experiences there as a war reporter during the 1990s, Butcher unravels this complex part of the world and its conflicts, and shows how the events that were sparked that day in June 1914 still have influence today. Published for the centenary of the assassination, The Trigger is a rich and timely work, part travelogue, part reportage, and part history.

Praise For The Trigger: Hunting the Assassin Who Brought the World to War…

Tim Butcher, one of the bravest and kindest foreign journalists who saw the Bosnian war, has written a splendid book, part-memoir, part history, of that country, ingeniously using the assassin of 1914 as an anti-hero. It takes its place among classics of Balkan history.”
Norman Stone, author of World War One: A Short History and The Eastern Front 1914-1917

Tim Butcher has re-written history with this evocative and moving journey in the footsteps of the assassin who sparked the First World War. Instead of a naive and misguided Serbian nationalist, he reveals an intelligent and determined South Slav patriot who gave his life for the cause. The Serbian state should not have been held to account. A superb and important book .”
Saul David, author of Military Blunders: The How and Why of Military Failure and The Illustrated Encyclopedia of Warfare

Take a measure of well-researched history, add indelible personal recollections of the Bosnian war, season with piquant vignettes of traversing rural Bosnia on foot and mix with a light touch. The result is consistently appetizing and occasionally controversial. Tim Butcher goes from strength to strength. I enjoyed every paragraph.”
Dervla Murphy, author of Full Tilt: Ireland to India With a Bicycle and Through the Embers of Chaos: Balkan Journeys

Rarely, if ever, can such momentous and tragic events have been sparked by such an unlikely and undistinguished a man, Gavrilo Princip. This insightful, useful and delightfully written book shines a unique spotlight on the trigger to the First World War, placing the assassin and his homeland in the wider strategic context. A great bookone to be recommended to professional and amateur historian alike.”
General Sir David Richards, Former Chief of the British Defence Staff

Born in 1967, Tim Butcher was on the staff of the Daily Telegraph from 1990 to 2009 serving as chief war correspondent, Africa bureau chief, and Middle East correspondent. His first book, Blood River, was a number one bestseller in the UK, a Richard and Judy Book Club selection and was shortlisted for the Samuel Johnson Prize. He is currently based in Cape Town with his family.