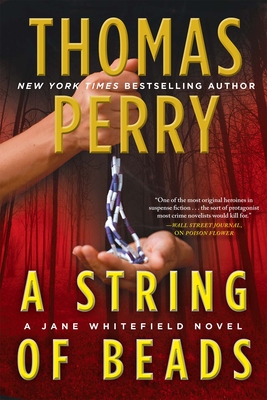 A String of Beads (Jane Whitefield #2)

After two decades protecting innocent victims on the run, and a year after getting shot on a job that took a dangerous turn for the worse, Jane McKinnon, n e Whitefield, has settled into the quiet life of a suburban housewife in Amherst, New York--or so she thinks. One morning as she comes back from a long run, Jane is met by an unusual sight: all eight clan mothers, the female leaders of the Seneca clans, parked in her driveway in two black cars. A childhood friend of Jane's from the reservation, Jimmy, is wanted by the police for the murder of a local white man. But instead of turning himself in, he's fled, and no one knows where he is hiding out. At the clan mothers' request, Jane retraces a walking trip she and Jimmy took together when they were fourteen in hopes that he has gone the same way again. But it soon becomes clear that the police aren't the only ones after him. As the chase intensifies, the number of people caught up in this twisted plot multiplies, and Jane is the only one who can protect those endangered by it. A String of Beads is an addictive, fast-paced thriller about how abandoning the past can sometimes be the hardest thing to do, even when your life--and the life of those you love--depends on it.

Thomas Perry is the bestselling author of over twenty novels including The Butcher's Boy, which won an Edgar Award. Metzger's Dog was a New York Times Notable Book of the Year, and Vanishing Act was named by the Independent Mystery Booksellers Association as one of their 100 Favorite Mysteries of the Twentieth Century. He lives in Southern California.
or support indie stores by buying on