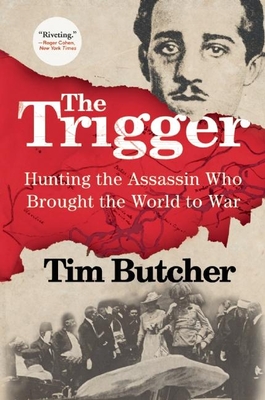 Hunting the Assassin Who Brought the World to War

On a summer morning in Sarajevo a hundred years ago, a teenager named Gavrilo Princip took a pistol out of his pocket and fired the opening rounds of the First World War. By killing Archduke Franz Ferdinand, heir to the Austro-Hungarian Empire, Gavrilo Princip started a cycle of events that would change the world forever. Retracing Princip's steps from the feudal frontier village of his birth to the great plain city of Belgrade and ultimately Sarajevo, journalist and bestselling author Tim Butcher makes discoveries about the assassin that have eluded historians for a hundred years. Drawing on his own experiences in the Balkans as a war reporter during the 1990s, he also unravels this complex part of the world and its conflicts, showing how the events that were sparked that day in June 1914 still have influence today. Part travelogue, part reportage, and part history, The Trigger is a rich and timely work about one of history's most crucial and least-understood characters.

Tim Butcher worked for the Daily Telegraph from 1990 to 2009 as chief war correspondent, Africa bureau chief, and Middle East correspondent. His first book, Blood River, was a number-one bestseller in the UK and was shortlisted for the Samuel Johnson Prize. He lives in Cape Town.
Loading...
or support indie stores by buying on
(This book is on backorder)