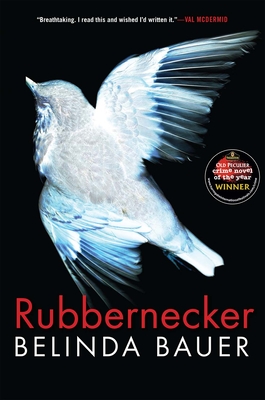 "Breathtaking. I read this and wished I'd written it."--Val McDermid Belinda Bauer is a phenomenal voice in British crime fiction, whose work has won the CWA's Gold Dagger Award for Crime Novel of the Year and garnered rave reviews on both sides of the Atlantic. Winner of the 2014 Theakstons Old Peculier Crime Novel of the Year Award, Rubbernecker is a gripping thriller about a medical student who begins to suspect that something strange is going on in this cadaver lab. "The dead can't speak to us," Professor Madoc had said. But that was a lie. The body Patrick Fort is examining in anatomy class is trying to tell him all kinds of things. But no one hears what he does, and no one understand when he tries to tell them. Life is already strange enough for Patrick--being a medical student with Asperger's Syndrome doesn't come without its challenges. And that's before he is faced with solving a possible murder, especially when no one believes a crime has even taken place. Now he must stay out of danger long enough to unravel the mystery. But as Patrick learns one truth from a dead man, he discovers there have been many other lies closer to home. A can't-put-it-down page-turner from one of the finest voices in UK crime, Rubbernecker puts Belinda Bauer firmly on the map of world-class crime writers. "An intelligent, disturbing read."--The Guardian (UK)

Belinda Bauer grew up in England and South Africa. She has worked as a journalist and screenwriter and her script The Locker Room earned her the Carl Foreman/Bafta Award for Young British Screenwriters. She is the author of five award-winning novels which have been translated into twenty-one languages. She lives in Wales.
Loading...
or
Not Currently Available for Direct Purchase