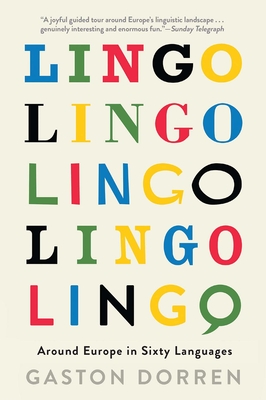 Around Europe in Sixty Languages

Whether you're a frequent visitor to Europe or just an armchair traveler, the surprising and extraordinary stories in Lingo will forever change the way you think about the continent, and may even make you want to learn a new language. Lingo spins the reader on a whirlwind tour of sixty European languages and dialects, sharing quirky moments from their histories and exploring their commonalities and differences. Most European languages are descended from a single ancestor, a language not unlike Sanskrit known as Proto-Indo-European (or PIE for short), but the continent's ever-changing borders and cultures have given rise to a linguistic and cultural diversity that is too often forgotten in discussions of Europe as a political entity. Lingo takes us into today's remote mountain villages of Switzerland, where Romansh is still the lingua franca, to formerly Soviet Belarus, a country whose language was Russified by the Bolsheviks, to Sweden, where up until the 1960s polite speaking conventions required that one never use the word "you" in conversation, leading to tiptoeing questions of the form: "Would herr generaldirekt r Rexed like a biscuit?" Spanning six millenia and sixty languages in bite-size chapters, Lingo is a hilarious and highly edifying exploration of how Europe speaks.

Gaston Dorren is a linguist, journalist, and polyglot. He speaks Dutch, Limburgish, English, German, French, and Spanish, and reads nine more languages. He is the author of two books in Dutch, and the creator of an app, The Language Lover's Guide to Europe. Dorren lives in the Netherlands.
or
Not Currently Available for Direct Purchase
Copyright © 2020 American Booksellers Association