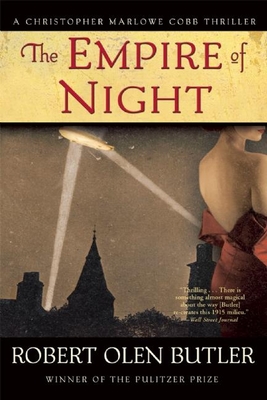 In the third installment of his critically acclaimed Christopher Marlowe Cobb series, Pulitzer Prize winner Robert Olen Butler continues to win over readers with the artfulness of his World War I settings and his charismatic leading man, a Chicago war correspondent turned spy. It is 1915, and President Woodrow Wilson is still assessing the war's threat to the United States. There is a mole in the British government, and Cobb's intelligence handlers send him to a castle on the Kentish coast to investigate a key suspect, Sir Albert Stockman. Working deep undercover, Cobb must also contend with an unusual sidekick--his own mother, the beautiful and mercurial Isabel Cobb. A famous stage actress, she is starring in a touring production of Hamlet and has been recruited to simultaneously keep tabs on Stockman, who happens to be an ardent fan. As the trio leaves the relative safety of Britain and heads into the lion's den of Berlin, Kit must unravel Stockman's secret agenda, and remain in character even under the very nose of the Kaiser.

Robert Olen Butler is the Pulitzer Prize-winning author of fifteen novels, including Hell, A Small Hotel, and the Christopher Marlowe Cobb series. He is also the author of six short story collections and a book on the creative process, From Where You Dream. He has twice won a National Magazine Award in Fiction and received the 2013 F. Scott Fitzgerald Award for Outstanding Achievement in American Literature. He teaches creative writing at Florida State University.
Loading...
or support indie stores by buying on