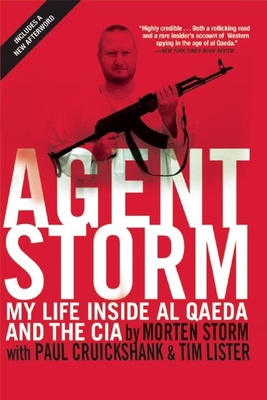 My Life Inside Al Qaeda and the CIA

Morten Storm was an unlikely jihadi. A six-foot-one red-haired Dane, Storm spent his teens in and out of trouble. A book about the Prophet Mohammed prompted his conversion to Islam, and Storm sought purpose in a community of believers. He attended a militant madrasah in Yemen, named his son Osama, and became close friends with Anwar al-Awlaki, the American-born terrorist cleric. But after a decade of jihadi life, he not only repudiated extremism but, in a quest for atonement, became a double agent for the CIA and British and Danish intelligence. Agent Storm takes readers inside the jihadist world like never before, showing the daily life of zealous men set on mass murder, from dodging drones with al Qaeda leaders in the Arabian desert to training in extremist gyms in Britain and performing supply drops in Kenya. The book also provides a tantalizing look at his dangerous life undercover, as Storm traveled the world for missions targeting its most dangerous terrorists, and into the most powerful spy agencies: their tradecraft, rivalries, and late-night carousing, as well as their ruthless use of a beautiful blonde in an ambitious honey trap. Agent Storm is a captivating, utterly unique, real-life espionage tale.

Morten Storm is a former radical Islamist born in Korsor, Denmark. After plunging deep inside the world of al Qaeda, he became a double agent employed by the American, British, and Danish intelligence agencies. He lives in an undisclosed location. Paul Cruickshank is CNN's Terrorism Analyst, and the editor of Al Qaeda, a five-volume collection of key scholarly works on the terrorist network. Tim Lister has worked for CNN and the BBC and has extensive experience of the Middle East.
Loading...
or support indie stores by buying on