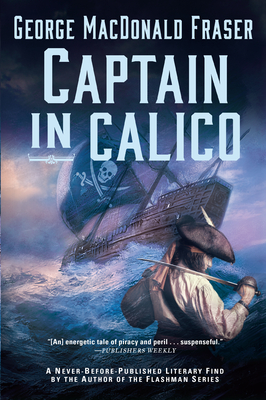 George MacDonald Fraser was famed for his legendary Flashman series, featuring the incorrigible knave Harry Flashman. In the colorful standalone novel Captain in Calico, which has never been published, Fraser introduces another real-life anti-hero: Captain John Rackham, called "Calico Jack," an illustrious eighteenth-century pirate who marauded the Caribbean seas. On a tranquil evening in the Bahamas, Calico Jack, long wanted on counts of piracy, makes a surprise appearance at the Governor's residence and asks for a pardon. A deal is brokered after Jack reveals the motive for turning himself in: love. When he last set sail from the Bahamas two years ago, Jack left behind a beautiful fianc e, and he hopes to win her back. But while Jack was off pirating, his beloved has become betrothed to a new man--the governor himself. It doesn't take long for this truth to come to light, and after embarking on a new romance with famous Irish pirate Anne Bonney, Jack is quickly transformed back into a thieving captain in calico. With his trademark picaresque style, Fraser draws readers into the wild west of the British empire, where black sails prowl the waters and redemption can be found in the most unexpected places.

George MacDonald Fraser (1925-2008) was the author of the Flashman Papers series. Born in England and educated in Scotland, he served in a Highland regiment in India, Africa, and the Middle East. In addition to his books, he wrote screenplays, including The Three Musketeers, and the James Bond film Octopussy.
Loading...
or
Not Currently Available for Direct Purchase