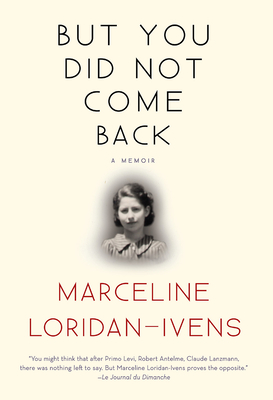 But You Did Not Come Back

"You might come back, because you're young, but I will not come back."--Marceline Loridan's father to her, 1944 A runaway bestseller in France, But You Did Not Come Back has already been the subject of a French media storm and hailed as an important new addition to the library of books dealing with the Holocaust. It is the profoundly moving and poetic memoir by Marceline Loridan-Ivens, who at the age of fifteen was arrested in occupied France, along with her father. Later, in the camps, he managed to smuggle a note to her, a sign of life that made all the difference to Marceline--but he died in the Holocaust, while Marceline survived. In But You Did Not Come Back, Marceline writes back to her father, the man whose death overshadowed her whole life. Although her grief never diminished in its intensity, Marceline ultimately found her calling, working as both an activist and a documentary filmmaker. But now, as France and Europe in general faces growing anti-Semitism, Marceline feels pessimistic about the future. Her testimony is a memorial, a confrontation, and a deeply affecting personal story of a woman whose life was shattered and never totally rebuilt.