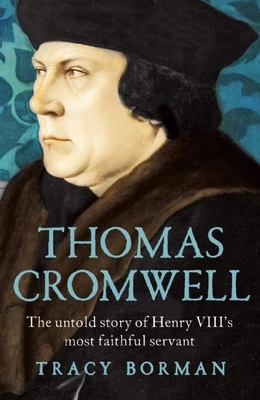 Thomas Cromwell has long been reviled as a Machiavellian schemer who stopped at nothing in his quest for power. As King Henry VIII's right-hand man, Cromwell was the architect of the English Reformation; secured Henry's divorce from Catherine of Aragon and plotted the downfall of his second wife, Anne Boleyn; and was fatally accused of trying to usurp the king himself. But in this engrossing new biography, acclaimed British historian Tracy Borman reveals a different side to one of history's most notorious characters: that of a caring husband and father, a fiercely loyal servant and friend, and a revolutionary who was key in transforming medieval England into a modern state. Born in the mid-1480s to a lowly blacksmith, Cromwell left home at eighteen to make his fortune abroad. He served as a mercenary in the French army, worked for a powerful merchant banker in Florence at the height of the Italian Renaissance, and became a promising young cloth merchant in the Netherlands, then the mercantile capital of the world. But Cromwell decided to return to England and there built a flourishing legal practice. It wasn't long before Cardinal Thomas Wolsey, who was the Archbishop of York and the King's closest confidant, took note of Cromwell's immense intelligence, resourcefulness, and wit, turning him into his prot g . When Wolsey was put under arrest for overstepping his bounds, Cromwell both protected his mentor and supplanted him. And he accomplished what Wolsey never could: Henry's divorce from his first wife Catherine of Aragon and a revolution in Britain's religious life. As Henry's top aide, Cromwell was at the heart of the most momentous event of his time--from funding the translation and dissemination of the first vernacular Bible to legitimizing Anne Boleyn as queen--and wielded immense power over both church and state. The impact of his seismic political, religious, and social reforms can still be felt today. Grounded in excellent primary source research, Thomas Cromwell gives an inside look at a monarchy that has captured the Western imagination for centuries and tells the story of a controversial and enigmatic man who forever changed the shape of his country.

Tracy Borman is England's joint chief curator of Historic Royal Palaces and chief executive of the Heritage Education Trust. She has written five previous books, including the highly acclaimed Elizabeth's Women: Friends, Rivals, and Foes Who Shaped the Virgin Queen. She has a PhD in history from the University of Hull and lives in Surrey with her family.
Loading...
or support indie stores by buying on