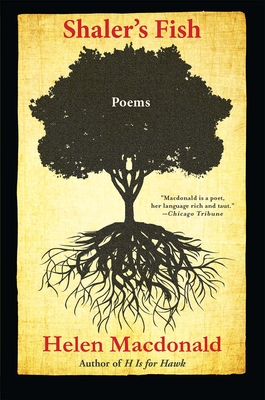 Before Helen Macdonald rose to international acclaim with her beautiful and nearly feral (New York Times) bestselling memoir H Is for Hawk, she wrote a collection of poetry, Shaler's Fish. In robust, lyrical verse, Shaler's Fish roams both the outer and inner landscapes of the poet's universe, seamlessly fusing reflections on language, science, and literature, with the loamy environments of the natural worlds around her. Moving between the epic--war, history, art, myth, philosophy--and the specific--CNN, Ancient Rome, Auden, Merleau-Ponty--Macdonald examines with humor and intellect what it means to be awake and watchful in the world. These are poems that probe and question, within whose nimble ecosystems we are as likely to encounter Schubert as we are a hand of violets, Isaac Newton as a winged quail on turf. Nothing escapes Macdonald's eye and every creature herein--from the smallest bird to the loftiest thinker--holds a significant place in her poems. This is an unparalleled collection from one of greatest nature writers, and a poet of dazzling music and vision.

Helen Macdonald is a writer, poet, illustrator and naturalist, and an affiliated research scholar at the Department of History and Philosophy of Science at the University of Cambridge. She is the author of the bestselling H Is for Hawk, as well as a cultural history of falcons, titled Falcon, and three collections of poetry, including Shaler's Fish. Macdonald was a Research Fellow at Jesus College, Cambridge, has worked as a professional falconer, and has assisted with the management of raptor research and conservation projects across Eurasia. She now writes for the New York Times Magazine. Twitter: @HelenJMacdonald
Loading...
or support indie stores by buying on