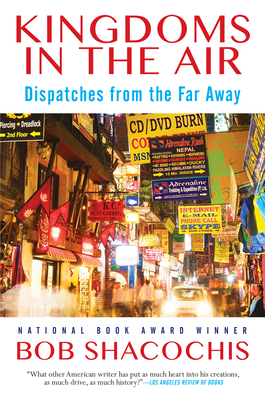 Kingdoms in the Air

Dispatches from the Far Away

"Shacochis has extended his knowledge and imagination into places most of us have never ventured."--Washington Post Best known for his sweeping international and political fiction narratives, including The Woman Who Lost Her Soul, which won the Dayton Peace Prize and was finalist for the Pulitzer Prize, Bob Shacochis began his writing career as a pioneering journalist and contributing editor for Outside Magazine and Harper's. Kingdoms in the Air brings together the very best of Shacochis's culture and travel essays in one livewire collection that spans his global adventures and his life passions; from surfing, to his obsession with the South American dorado, to the time he went bushwhacking in Mozambique. In the titular essay "Kingdoms," the longest work in the collection, Shacochis ventures to Nepal with his friend, the photographer, Thomas Laird, who was the first foreigner to live in Nepal's kingdom of Mustang as the forbidden Shangri-la prepared to open its borders to trekkers and trade. When the two men return a decade after Laird first lived there, Shacochis observes in brilliantly evocative prose both the current cultural and political landscape of the country and the changes that his friend has to reconcile with. Replete with Shacochis's signature swagger, humor, and crystalline wisdom, Kingdoms in the Air is a majestic and essential collection from one of our most important writers.

Bob Shacochis's first collection of stories, Easy in the Islands, won the National Book Award for First Fiction, and his second collection, The Next New World, was awarded the Prix de Rome from the American Academy of Arts and Letters. He is also the author of the novel Swimming in the Volcano, a finalist for the National Book Award, The Immaculate Invasion, a work of literary reportage that was a finalist for The New Yorker Book Award for Best Nonfiction of the Year; and The Woman Who Lost Her Soul, which won the Dayton Peace Prize and was a finalist for the Pulitzer Prize for Fiction. Shacochis is a contributing editor at Outside, a former columnist for Gentleman's Quarterly, and has served as a contributing editor for Harper's and GQ. His op-eds on the US military, Haiti, and Florida politics have appeared in The New York Times, The Washington Post, and The Wall Street Journal.
Loading...
or support indie stores by buying on