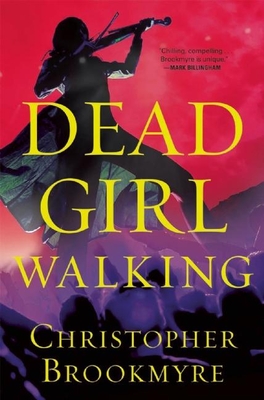 Dead Girl Walking is the latest thrilling novel from one of Scotland's most treasured crime writers, as well known in his native country as Val McDermid, Ian Rankin, and Denise Mina. Christopher Brookmyre's books have sold over one and a half million copies worldwide, and in Dead Girl Walking, he has written his most addictive thriller yet--a gripping story of sex, drugs, rock 'n' roll, and murder. Life is dangerous when you have everything to lose. Famous, beautiful, and talented, Heike Gunn has the world at her feet. Then, one day, she simply vanishes. Meanwhile, maverick Scottish journalist Jack Parlabane has lost everything. Once highly regarded for his tireless investigation of even the most unpleasant of Glasgow's gangsters, his involvement in a scandal involving a lost government laptop has cost him his career, his wife, and his self-respect. A call from an old friend offers Parlabane a chance for redemption--but only if he can find out what happened to Heike, the lead singer of the internationally renowned folk rock band Savage Earth Heart. Pursued by those who would punish him for past crimes, Parlabane enters the secret-filled world of Savage Earth Heart, a group at its breaking point. Each of its members seems to be hiding something, not least its newest recruit Monica Halcrow, whose speculated relationship with Heike has become a public obsession. Monica's own story, however, reveals a far darker truth. Fixated on Heike from day one, she has been engulfed by paranoia, jealousy, and fear as she discovers the hidden price of fame. And she may not be the only one suffering. From Berlin to Barcelona, from the streets of Milan to remote Scottish islands, Dead Girl Walking is a whirlwind tour of the dark side of the music industry from one of Britain's masters of crime writing.

Christopher Brookmyre is the author of seventeen previous novels, including his acclaimed and internationally bestselling series featuring Jasmine Sharp and Catherine McLeod. He has won many awards for his work, including the Critics' First Blood Award, the Bollinger Everyman Wodehouse Prize, and the Glenfiddich Spirit of Scotland Award. His latest novel is Bred in the Bone.
or
Not Currently Available for Direct Purchase