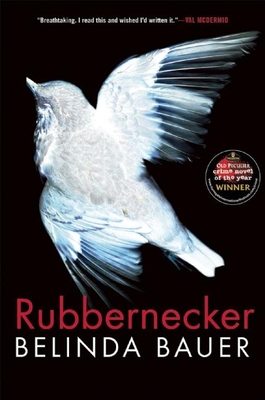 "Breathtaking. I read this and wished I'd written it."--Val McDermid Winner of the Theakston Old Peculier Crime Novel of the Year Award, an Amazon Best Book of the Month, and one of the Guardian's Best Crime and Thrillers of the Year, Rubbernecker is a can't-put-it-down page-turner from one of the finest voices in UK crime, about a medical student who begins to suspect that something strange is going on in his cadaver lab. "The dead can't speak to us," Professor Madoc had said. But that was a lie. The body Patrick Fort is examining in anatomy class is trying to tell him all kinds of things. But no one hears what he does, and no one understand when Patrick tries to tell them. Life is already strange enough for Patrick--being a medical student with Asperger's syndrome doesn't come without its challenges. And that's before he is faced with solving a possible murder, especially when no one believes a crime has even taken place. As his determination to uncover the truth grows, so do the suspicions of his classmates, teachers--even his mother wonders if Patrick is all right. Now he must stay out of danger long enough to unravel the mystery. But as Patrick learns one truth from a dead man, he discovers there have been many other lies closer to home.

Belinda Bauer is the author of six award-winning novels which have been translated into twenty-one languages. Rubbernecker is her third novel to be published in North America. She won the Crime Writers' Association's Gold Dagger Award for Crime Novel of the Year for Blacklands, the Theakston Old Peculier Crime Novel of the Year Award for Rubbernecker, and the CWA Dagger in the Library Award for outstanding body of work. She lives in Wales.
Loading...
or support indie stores by buying on