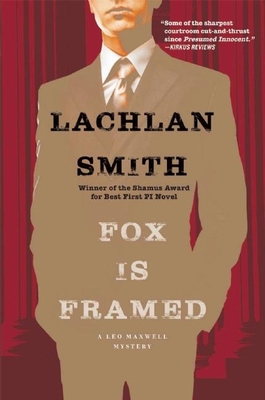 Lachlan Smith won widespread critical acclaim for his first novel in the Leo Maxwell series, Bear Is Broken, which won the Shamus Award for Best First PI Novel. In the tense and twist-filled third novel, Fox Is Framed, private attorney Leo Maxwell is forced to contend with a family drama that has haunted him--and his elder brother, Teddy--since childhood. Faced with evidence of stunning prosecutorial misconduct, a San Francisco judge has ordered a new trial for the Maxwell brothers' father, Lawrence, who has spent two decades in San Quentin for the murder of their mother. Teddy has always been convinced of their father's innocence, but Leo is less sure. The new case is almost derailed at the outset when a fellow inmate comes forward claiming that Lawrence confessed to the murder in prison. The snitch soon turns up dead, with Lawrence again the prime suspect. His doubts mounting, Leo teams up with hotshot attorney Nina Schuyler to defend Lawrence against murder charges both old and new. Working the streets while Nina handles the action in the courtroom, Leo must confront the darkness at the center of his life as he follows a trail of corruption and danger that leads to the very steps of City Hall.

Lachlan Smith was a Richard Scowcroft Fellow in the Stegner Program at Stanford and received an MFA from Cornell. The first book in the Leo Maxwell Mystery series, Bear Is Broken, won the 2014 Shamus Award for Best First PI Novel. Smith's fiction has also appeared in the Best New American Voices series. In addition to writing novels, he is an attorney practicing in the area of civil rights and employment law. He lives in Alabama.
Loading...
or support indie stores by buying on