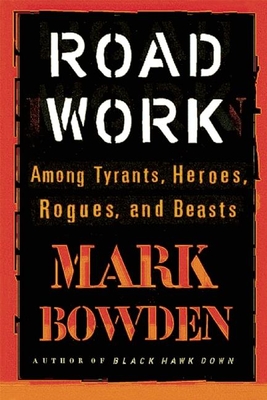 Among Tyrants, Heroes, Rogues, and Beasts

Mark Bowden, author of the #1 New York Times bestseller Black Hawk Down, brings readers into the heat of a story in a way few writers can. Road Work offers a selection of the best of his award-winning nonfiction, from his breakout stories for the Philadelphia Inquirer to his trenchant pieces in the Atlantic on the conflicts in Afghanistan and Iraq. Whether traveling to a small town in Rhode Island to penetrate one of the largest cocaine rings in history, or to the Luangwa Valley in Zambia where a team of antipoachers fights to save the black rhino, Bowden takes us down rough roads previously off-limits. "The Dark Art of Interrogation" exposes the top-secret world of Guant namo Bay, offering an insider's view of the controversial, often shocking ways America is fighting its war on terror. "Tales of a Tyrant" takes us into the world of Saddam Hussein, shedding new and dramatic light on his life, his reign of terror, and his days on the run. From everyday people to mad scientists to celebrities such as Al Sharpton and Norman Mailer, Road Work invites us into the private and public lives of unique and fascinating characters. Powerfully gripping, elucidating, even wryly humorous, Road Work shows why Mark Bowden has won a reputation as a nonfiction writer of the very highest caliber.

Mark Bowden is the award-winning author of the #1 New York Times bestseller Black Hawk Down, Killing Pablo, Guests of the Ayatollah, and other books. He reported at the Philadelphia Inquirer for twenty years and now writes for the Atlantic, Vanity Fair, and other magazines. He is also the writer in residence at the University of Delaware. His most recent book is The Three Battles of Wanat: And Other True Stories.
Loading...
or support indie stores by buying on