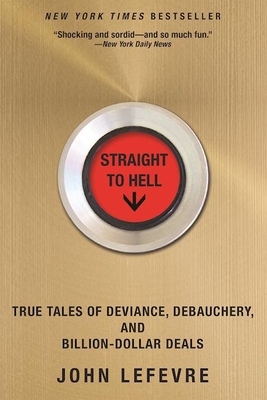 "Some chick asked me what I would do with 10 million bucks. I told her I'd wonder where the rest of my money went."--@GSElevator Darkly funny, remarkably revealing, and utterly unapologetic, Straight to Hell is John LeFevre's own account of his adventures as a globe-conquering investment banker whose career spanned New York, London, and Hong Kong. Sitting above the "Chinese Wall" separating investment banking and sales and trading, in a senior position with a unique vantage point, LeFevre did billion-dollar deals with sovereign borrowers, prestigious multinational corporations, and every bank on Wall Street, not to mention Chinese tycoons and Indonesian thugs, and shot up the ranks to be one of the most prolific bond syndicate managers in Asia. He also got banned from the Four Seasons, where he was living at the time, totaled his brand-new Maserati, and indulged in riotous debauchery on and off the trading floor. Hundreds of thousands follow LeFevre's @GSElevator Twitter account; Goldman Sachs launched an internal investigation into his tweets, and when his true identity was revealed, it created a national media firestorm--but that was only part of the story. Straight to Hell delves deep inside an industry that is both envied and reviled, taking you from the training programs, trading floors, and roadshows to private planes, shady deals, and after-hours overindulgence. This is not a moralistic tale of redemption. Full of shocking rule-breaking, frat-boyish antics, and win-at-all-cost schemes, Straight to Hell brazenly pulls back the curtain on the deviant and absolutely excessive world of finance. Also included are some of the best lines from @GSElevator, created and curated by LeFevre. Prepare yourself and buckle up, because this is one of the most entertaining and eye-opening books ever written about the world of finance.

John LeFevre has enjoyed a distinguished career in international finance. He joined Salomon Brothers immediately out of college, and worked for Citigroup in New York, London, and Hong Kong. In 2010 he was hired by Goldman Sachs to be head of Debt Syndicate in Asia, a position that he eventually did not take due to a contractual issue. He has written for Business Insider and has been interviewed about @GSElevator by the New York Times, CNN, and other outlets.
Loading...
or support indie stores by buying on