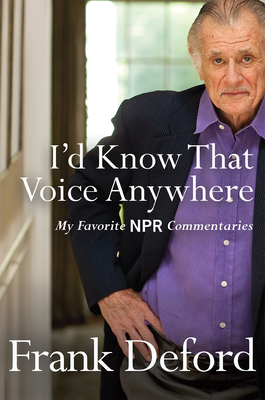 I'd Know That Voice Anywhere

Frank Deford is one of the most beloved sports journalists in America. A contributing writer to Sports Illustrated for more than fifty years, and a longtime correspondent on Real Sports with Bryant Gumbel, these days, Deford is perhaps best known for his weekly commentaries on NPR's "Morning Edition." Since 1980, Deford has recorded 1,600 of them, and in I'd Know That Voice Anywhere he brings together the very best, creating a charming, insightful, and wide-ranging look at athletes and the world of sports. In I'd Know That Voice Anywhere, Deford discusses everything from sex scandals and steroids to why, in a culture dominated by celebrity, sport is the only field on earth where popularity and excellence thrive in tandem. This page-turning compendium covers more than thirty years of sports history while showcasing the vast range of Deford's interests and opinions, including his thoughts on the NCAA, why gay athletes "play straight," and why he's worried about living in an economy that is so dominated by golfers. A rollicking sampler of one of NPR's most popular segments, I'd Know That Voice Anywhere is perfect for sports enthusiasts--as well as sports skeptics--and a must-read for any Frank Deford fan.

In addition to his work at National Public Radio, Sports Illustrated, and Real Sports with Bryant Gumbel, Frank Deford is the author of numerous works of nonfiction, including The Old Ball Game and Over Time, as well as ten novels and two screenplays. He is a recipient of the PEN/ESPN Lifetime Achievement Award for Literary Sports Writing and the National Humanities Medal.
Loading...
or
Not Currently Available for Direct Purchase