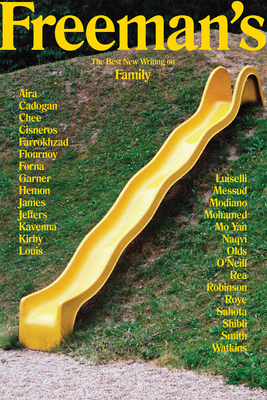 Freeman's: Family is the second literary anthology in the series reviewers are calling "bold" (Minneapolis Star-Tribune) and "refreshing" (Chicago Literati). Following a debut issue on the theme of "Arrival," Freeman circles a new topic whose definition is constantly challenged by the best of our writers: family. In an essay called Crossroads, Aminatta Forna muses on the legacy of slavery as she settles her family in Washington, DC, where she is constantly accused of cutting in line whenever she stands next to her white husband. Families are hardly stable entities, so many writers discover. Award-winning novelist Claire Vaye Watkins delivers a stunning portrait of a woman in the throes of postpartum depression. Booker Prize winner Marlon James takes the focus off absent fathers to write about his mother, who calls to sing him happy birthday every year. Even in the darkest moments, humor abounds. In Claire Messud's home there are two four-legged tyrants; Sandra Cisneros writes about her extended family of past lovers; and Aleksandar Hemon tells the story of his uncle's return from the Soviet gulag. With outstanding work from literary heavyweights and up-and-coming writers alike, Freeman's: Family collects the most amusing, heartbreaking, and probing stories about family life today.

John Freeman was the editor of "Granta" until 2013. His books include "How to Read a Novelist" and "Tales of Two Cities: the Best and Worst of Times in Today's New York." He is executive editor at the Literary Hub and teaches at the New School and New York University. His work has appeared in the "New Yorker," the "New York Times," and the "Paris Review."
Loading...
or support indie stores by buying on