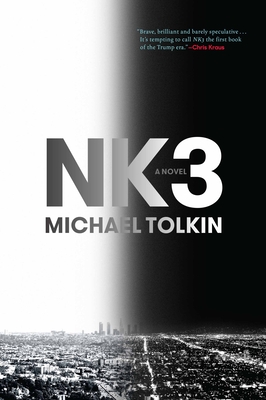 With The Player and The Return of the Player, Michael Tolkin established himself as the master novelist of modern Hollywood. In his new novel, NK3, the H LYW OD sign presides over a Los Angeles devastated by a weaponized microbe that has been accidentally spread around the globe, deleting human identity. In post-NK3 Los Angeles, a sixty-foot-tall fence surrounds the hills where the rich used to live, but the mansions have been taken over by those with the only power that matters: the power of memory. Life for the community inside the Fence, ruled over by the new aristocracy, the Verified, is a perpetual party. Outside the Fence, in downtown Los Angeles, the Verified use an invented mythology to keep control over the mindless and nameless Drifters, Shamblers, and Bottle Bangers who serve the gift economy until no longer needed. The ruler, Chief, takes his guidance from gigantic effigies of a man and a woman in the heart of the Fence. They warn him of trouble to come, but who is the person to watch: the elusive Eckmann, holed up with the last functioning plane at LAX; Shannon Squier, the chisel-wielding pop superstar from the pre-NK3 world, pulled from the shambling masses; a treacherous member of Chief's inner circle; or Hopper, the uncommon Drifter compelled by an inner voice to search for a wife whose name and face he doesn't know? Each threatens to upset the delicate power balance in this fragile world. In deliciously dark prose, Tolkin winds a noose-like plot around this melee of despots, prophets, and rebels as they struggle for command and survival in a town that still manages to exert a magnetic force, even as a ruined husk.

Michael Tolkin is an award-winning writer, director, and producer. His novels include The Player, The Return of the Player, Among the Dead, and Under Radar. For the film adaptation of The Player, Tolkin won the Writers Guild Award, the British Academy Award, the PEN Center USA West Literary Award, the Edgar Allan Poe Award for best crime screenplay, and was nominated for an Academy Award. Most recently, he has been a consulting producer and writer for the Showtime series Ray Donovan.
or
Buy Here
Copyright © 2020 American Booksellers Association