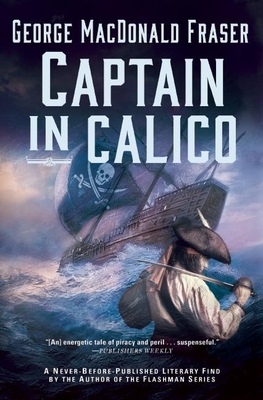 George MacDonald Fraser was renowned for his legendary Flashman series featuring the incorrigible knave Harry Flashman, a soldier in the British army. After Fraser's death, his children discovered an unpublished first novel locked away in his study: Captain in Calico. In this lively stand-alone, Fraser introduces the real-life antihero Captain John Rackham. Called Calico Jack, he was the first to fly the skull and crossbones on a black flag, an illustrious eighteenth-century pirate who marauded the perilous Caribbean seas. One tranquil evening in the Bahamas, Calico Jack, wanted on counts of piracy, makes a surprise appearance at the governor's residence and asks for a pardon for his men. When Jack last set sail from the Bahamas two years prior, he left behind a beautiful fiancee he hopes to win back. A deal is brokered, but what the governor does not reveal is that while Jack was off looting the Spaniards, his beloved has become betrothed to a new man--the governor himself. Jack discovers he has been deceived and, in a fury, publicly threatens the governor, then locks swords with a notorious Frenchman outside a pub. All seems lost until a buxom Irishwoman, Anne Bonney, comes to his rescue and sets about planning one of the most audacious lootings the Caribbean has ever seen.

George MacDonald Fraser (1925-2008) was the author of the bestselling Flashman series. Born in England and raised in Scotland, he served in the Highland regiment in India, Africa, and the Middle East. He also wrote screenplays, including The Three Musketeers and the James Bond film Octopussy.
Loading...
or support indie stores by buying on