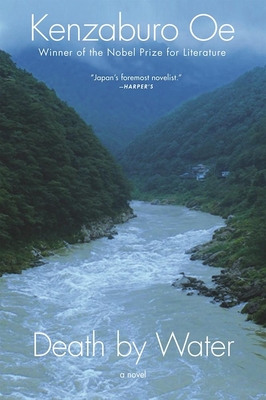 Nobel Prize winner Kenzaburo Oe is internationally acclaimed for his groundbreaking, incisive examination of humanity's struggle through modernity. In Death by Water, his recurring protagonist and literary alter ego returns to his hometown village in search of a red suitcase fabled to hold documents revealing the details of his father's death during World War II: details that will serve as the foundation for his new, and final, novel. Since his youth, renowned writer Kogito Choko planned to fictionalize his father's fatal drowning in order to fully process the loss. Choko has long been driven to discover why his father was boating on the river during a torrential storm. Though he remembers overhearing his father and a group of soldiers discussing an insurgent scheme to stage a suicide attack on Emperor Mikado, Choko cannot separate his memories from imagination and his family is hesitant to confess the entire story. When the contents of the trunk turn out to offer little clarity, he abandons the novel in creative despair. Floundering as an artist, he's haunted by fear that he may never write his tour de force. But when he collaborates with an avant-garde theater troupe dramatizing his early novels, Choko is revitalized and he finds the will to continue investigating his father's demise. Diving into the turbulent depths of legacy and mortality, Death by Water is an exquisite exploration of resurfacing national and personal trauma, and the ways that storytelling can mend political, social, and familial rifts.

Kenzaburo Oe was awarded the Nobel Prize in Literature for creating "an imagined world, where life and myth condense to form a disconcerting picture of the human predicament today." He is the author of numerous books, including The Changeling; Rouse Up, O Young Men of the New Age; Hiroshima Notes; A Personal Matter; Teach Us to Outgrow Our Madness; and The Silent Cry, among others.
Loading...
or support indie stores by buying on