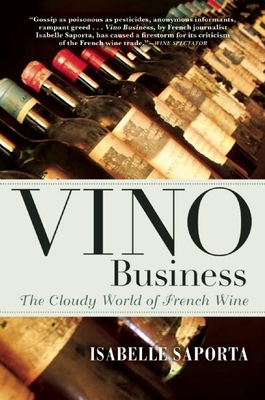 The Cloudy World of French Wine

Already provoking debate and garnering significant attention in France and within the wine world, Vino Business is a surprising and eye-opening book about the dark side of French wine by acclaimed investigative journalist Isabelle Saporta. While Bordeaux has been a bastion of winemaking tradition and excellence for centuries, in recent decades the industry has changed dramatically under the influence of large-scale international investors. French insurance companies, international fashion houses and Chinese businessmen are all speculating on the area's wines and land, some of whose value has increased tenfold in the last decade alone. Saporta investigates in detail the 2012 classification of the wines of Saint- milion, the most prestigious appellation of Bordeaux's right bank, which has come into disrepute, not least because the scoring system was changed in order to give points for a ch teaux's lecture facilities and the size of its parking lot. The quality of the wine counts for just thirty percent of the total score for the wines of the top ranking, those deemed premier grand cru class A. In other chapters, Saporta investigates issues of wine labeling and the use of pesticides, and draws comparisons to Champagne, Burgundy, and the rest of the wine world. A shocking expos of the French wine world, and a cri de coeur for the lost values of traditional winemaking, Vino Business pulls back the curtain on the secret domain of Bordeaux, a land ever more in thrall to the grapes of wealth.

Isabelle Saporta is an investigative journalist and documentary filmmaker. In 2011, she published The Black Book of Agriculture, which sold more than 60,000 copies in France alone. Vino Business is her first book to be translated into English. She lives in Paris, France.
Loading...
or
Not Currently Available for Direct Purchase