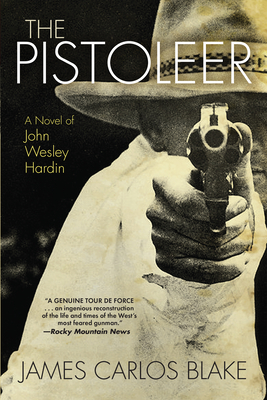 A Novel of John Wesley Hardin

Some called him a Texas hero. Some called him the Devil himself. But on one point they all agreed. While he was alive, John Wesley Hardin was the deadliest man in Texas. A novel of uncompromising depth and power from western master James Carlos Blake, called "one of the greatest chroniclers of the mythical American outlaw life" by Entertainment Weekly, The Pistoleer narrates the life of John Wesley Hardin, exposing the many different sides of a man who became a legend. For his forty-two years on this earth, Hardin's name was synonymous with outlaw. A killer at fifteen, in the next few years he became skilled enough with his pistols to back down Wild Bill Hickock in the street. By the time the law caught up with Hardin when he was twenty-five, he had killed as many as forty men and been shot so many times that, it was said, he carried a pound of lead in his flesh. In jail he became a scholar, studying law books until he won himself freedom, and afterwards he tried to lead an upright life. It was not to be. By the time he was killed in 1895, Hardin was an anachronism--the last true gunfighter of the Old West. With each chapter told from a different character's perspective, The Pistoleer is a reading experience not to be missed.

James Carlos Blake is the author of twelve novels, including The Rules of Wolfe, which was a finalist for the CWA Goldsboro Gold Dagger Award and was named one of the best 101 crime novels of the past decade by Booklist. He is a member of the Texas Institute of Letters and is a recipient of the Los Angeles Times Book Prize for In the Rogue Blood. He lives in Arizona.
Loading...
or support indie stores by buying on