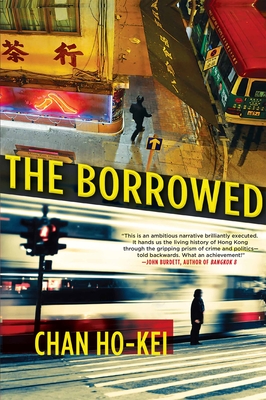 From award-winning Hong Kong writer Chan Ho-Kei, The Borrowed tells the story of Kwan Chun-dok, a Hong Kong detective whose career spans fifty years of the territory's history. A deductive powerhouse, Kwan becomes a legend in the force, nicknamed "the Eye of Heaven" by his awe-struck colleagues. Divided into six sections told in reverse chronological order--each of which covers an important case in Kwan's career and takes place at a pivotal moment in Hong Kong history from the 1960s to the present day--The Borrowed follows Kwan from his experiences during the Leftist Riot in 1967, when a bombing plot threatens many lives; the conflict between the HK Police and ICAC (Independent Commission Against Corruption) in 1977; the Tiananmen Square Massacre in 1989; to the Handover in 1997; and the present day of 2013, when Kwan is called on to solve his final case, the murder of a local billionaire, while Hong Kong increasingly resembles a police state. Along the way we meet Communist rioters, ultraviolent gangsters, stallholders at the city's many covered markets, pop singers enmeshed in the high-stakes machinery of star-making, and a people always caught in the shifting balance of political power, whether in London or Beijing--all coalescing into a dynamic portrait of this fascinating city. Tracing a broad historical arc, The Borrowed reveals just how closely everything is connected, how history always repeats itself, and how we have come full circle to repeat the political upheaval and societal unrest of the past. It is a gripping, brilliantly constructed novel from a talented new voice.

Chan Ho-Kei was born and raised in Hong Kong. He has worked as software engineer, script writer, game designer and editor of comic magazines. His writing career started with the short story "The Murder Case of Jack and the Beanstalk," which was shortlisted for the Mystery Writers of Taiwan Award. He won the award the next year with "The Locked Room of Bluebeard." Chan's first novel, The Man Who Sold the World, won the Soji Shimada Mystery Award, the biggest mystery award in the Chinese-language world, and was published in five languages.
Loading...
or support indie stores by buying on