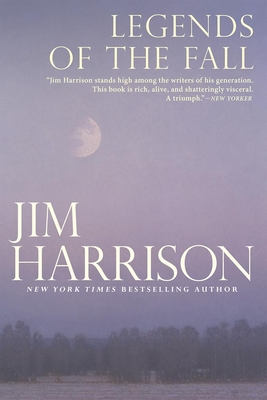 Legends of the Fall

New York Times bestselling author Jim Harrison was one of America's most beloved and critically acclaimed writers. The classic Legends of the Fall is Harrison at his most memorable: a striking collection of novellas written with exceptional brilliance and a ferocious love of life. The title novella, "Legends of the Fall"--which was made into the film of the same name--is an epic, moving tale of three brothers fighting for justice in a world gone mad. Moving from the raw landscape of early twentieth-century Montana to the blood-drenched European battlefields of World War I and back again to Montana, Harrison's powerful story explores the theme of revenge and the actions to which people resort when their lives or goals are threatened, painting an unforgettable portrait of the twentieth-century man. Also including the novellas "Revenge" and "The Man Who Gave Up His Name," Legends of the Fall confirms Jim Harrison's reputation as one of the finest American voices of his generation.

Jim Harrison (1937-2016) was the New York Times-bestselling author of nine volumes of novellas, twelve novels, fourteen collections of poetry, a book of children's literature, a memoir, and two collections of non-fiction. His books include Legends of the Fall, Dalva, and Returning to Earth. A member of the American Academy of Arts and Letters and winner of a National Endowment for the Arts grant, a Guggenheim Fellowship, and the Spirit of the West Award from the Mountain and Plains Booksellers Association, his work was published in twenty-seven languages.
Loading...
or support indie stores by buying on