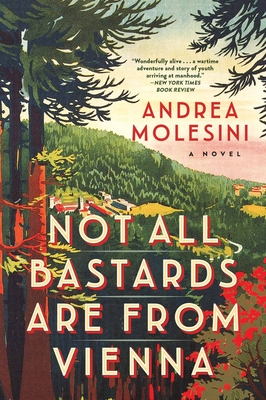 Not All Bastards Are from Vienna (Paperback)

In this critically acclaimed tour de force--an international bestseller and winner of the prestigious Campiello Prize--Andrea Molesini exquisitely portrays the depths of heroism and horror as a closely knit Italian community is forced to confront war's injustice at the end of World War I. In the autumn of 1917, Refrontolo--a small town near Venice--is invaded by Austrian soldiers as they advance into Northern Italy. The Spadas own the largest estate in the area, and orphaned seventeen-year-old Paolo lives there with his eccentric grandparents, headstrong aunt, and a loyal staff. When their villa is commandeered by the occupying army to house its senior officers, the family must lodge them or face eviction. In retaliation, the household becomes a bastion of resistance, both clashing and cooperating with the enemy troops imposing on their property. As Paolo tries to find his footing in the shifting and complex alliances around his, his once proud family succumbs to acts of jealousy and betrayal, love and hate. Then he is recruited to help with a compromising covert operation, and his life is put in irrevocable jeopardy. With singular insight and extraordinary compassion, Molesini examines the malignancy of war, its destruction of social order and moral values. Not all Bastards Are from Vienna is an unforgettable portrait of the erosion of tradition and the fall of an Italian aristocratic family whose personal battles burn with more fire than those of the war erupting around them.

Andrea Molesini lives in Venice, Italy, where he was born. He is a poet, an author of children's stories, a sailor, and a professor of comparative literature at Padua University.
or
Buy Here
Copyright © 2020 American Booksellers Association