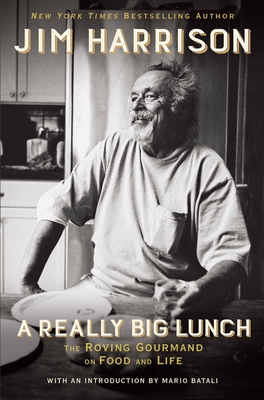 The Roving Gourmand on Food and Life

" A] culinary combo plate of Hunter S. Thompson, Ernest Hemingway, Julian Schnabel, and Sam Peckinpah . . . Harrison writes with enough force to make your knees buckle and with infectious zeal that makes you turn the pages hungry for more . . . Jim Harrison has staked out a distinctive place in the world of food writing."--Jane and Michael Stern, New York Times Book Review on The Raw and the Cooked New York Times bestselling author Jim Harrison was one of this country's most beloved writers, a muscular, brilliantly economic stylist with a salty wisdom. He also wrote some of the best essays on food around, earning praise as "the poet laureate of appetite" (Dallas Morning News). A Really Big Lunch, to be published on the one-year anniversary of Harrison's death, collects many of his food pieces for the first time--and taps into his larger-than-life appetite with wit and verve. Jim Harrison's legendary gourmandise is on full display in A Really Big Lunch. From the titular New Yorker piece about a French lunch that went to thirty-seven courses, to pieces from Brick, Playboy, Kermit Lynch Newsletter, and more on the relationship between hunter and prey, or the obscure language of wine reviews, A Really Big Lunch is shot through with Harrison's pointed aper us and keen delight in the pleasures of the senses. And between the lines the pieces give glimpses of Harrison's life over the last three decades. A Really Big Lunch is a literary delight that will satisfy every appetite. "Harrison is the American Rabelais, and he is at his irreverent and excessive best in this collection." --John Skowles, San Diego Union-Tribune on The Raw and the Cooked

Jim Harrison (1937-2016) was the New York Times-bestselling author of thirty-nine previous books of fiction, non-fiction, and poetry, including Legends of the Fall, Dalva, and Returning to Earth. A member of the American Academy of Arts and Letters and winner of a National Endowment for the Arts grant, his work was published in twenty-seven languages.
Loading...
or support indie stores by buying on