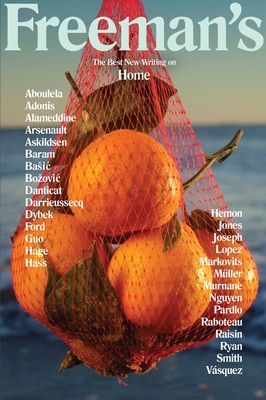 The third literary anthology in the series that has been called "ambitious" (O Magazine) and "strikingly international" (Boston Globe), Freeman's: Home, continues to push boundaries in diversity and scope, with stunning new pieces from emerging writers and literary luminaries alike. As the refugee crisis continues to convulse whole swathes of the world and there are daily updates about the rise of homelessness in different parts of America, the idea and meaning of home is at the forefront of many people's minds. Viet Thanh Nguyen harks to an earlier age of displacement with a haunting piece of fiction about the middle passage made by those fleeing Vietnam after the war. Rabih Alameddine brings us back to the present, as he leaves his mother's Beirut apartment to connect with Syrian refugees who are building a semblance of normalcy, and even beauty, in the face of so much loss. Home can be a complicated place to claim, because of race--the everyday reality of which Danez Smith explores in a poem about a chance encounter at a bus stop--or because of other types of fraught history. In "Vacationland," Kerri Arsenault returns to her birthplace of Mexico, Maine, a paper mill boomtown turned ghost town, while Xiaolu Guo reflects on her childhood in a remote Chinese fishing village with grandparents who married across a cultural divide. Many readers and writers turn to literature to find a home: Leila Aboulela tells a story of obsession with a favorite author. Also including Thom Jones, Emily Raboteau, Rawi Hage, Barry Lopez, Herta M ller, Amira Hass, and more--writers from around the world lend their voices to the theme and what it means to build, leave, return to, lose, and love a home.

John Freeman was the editor of Granta until 2013. His books include How to Read a Novelist, Tales of Two Cities: The Best and Worst of Times in Today's New York, and the forthcoming Tales of Two Americas: Stories from a Divided Country. Maps, his debut collection of poems, is out from Copper Canyon this fall. He is executive editor at the Literary Hub and teaches at the New School and New York University. His work has appeared in the New Yorker, the New York Times, and the Paris Review.
Loading...
or support indie stores by buying on