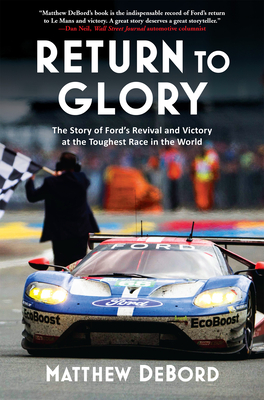 In January 2015 at the Detroit Auto Show, Ford unveiled a new car and the automotive world lost its collective mind. This wasn't some new Explorer or Focus. Onto the stage rolled a supercar, a carbon-fiber GT powered by a mid-mounted six-cylinder Ecoboost engine that churned out over 600 horsepower. It was sexy and jaw dropping, but, more than that, it was historic, a callback to the legendary Ford GT40 Mk IIs that stuck it to Ferrari and finished 1-2-3 at Le Mans in 1966. Detroit was back, and Ford was going back to Le Mans. Journalist Matthew DeBord has been covering the auto industry for years, and in Return to Glory he tells the recent story of Ford. A decade ago, CEO Alan Mulally took over the iconic company and, thanks to a financial gamble and his "One Ford" plan, helped it weather the financial crisis and a stock price that plunged to $1 a share, without a government bailout. It was enough for the company to dream of repeating racing history. DeBord revisits the story of the 1960s, details the creation of the new GT, and follows the team through the racing season, from an inauspicious debut at Daytona where the cars kept breaking down, to glimmers of hope at Sebring and the team's first victory at Laguna Seca in Monterey. Finally, DeBord joins the Ford team in Le Mans in June 2016. This fabled twenty-four-hour endurance race is designed to break cars and drivers, and it was at Le Mans, fifty years after the company's greatest triumph, that Ford's comeback was put to the ultimate test.

Matthew DeBord is a Business Insider senior correspondent, covering transportation. He has written for the New York Times, Slate, Washington Post, Huffington Post, CBS Interactive, and has appeared regularly on radio and television to discuss the auto industry. He is the author of The New York Book of Wine and Wine Country, USA. He lives in Montclair, New Jersey.
Loading...
or support indie stores by buying on