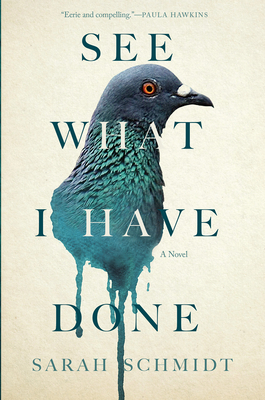 See What I Have Done

“See What I Have Done is a spellbinding historic reimagining of a Gothic tale many of us grew up knowing about. Schmidt brings to life all the characters in Lizzie Borden's world and takes the reader on an adventure through time and the investigation into the murder of her parents. Schmidt uses context to make the moment in history as much of a character as the people in the story, and the lively characters will keep you transfixed on the murder mystery. It is hard to say that a book about a murder is delightful, but See What I Have Done is a delightful, suspenseful, and satisfying read.”
— Steve Iwanski, Turnrow Book Co., Greenwood, MS
View the List

Lizzie Borden took an ax
And gave her mother forty whacks
When she saw what she had done,
She gave her father forty-one.


Or did she? In this riveting debut novel, See What I Have Done, Sarah Schmidt recasts one of the most fascinating murder cases of all time into an intimate story of a volatile household and a family devoid of love. On the morning of August 4, 1892, Lizzie Borden calls out to her maid: Someone's killed Father. The brutal ax-murder of Andrew and Abby Borden in their home in Fall River, Massachusetts, leaves little evidence and many unanswered questions. While neighbors struggle to understand why anyone would want to harm the respected Bordens, those close to the family have a different tale to tell--of a father with an explosive temper; a spiteful stepmother; and two spinster sisters, with a bond even stronger than blood, desperate for their independence. As the police search for clues, Emma comforts an increasingly distraught Lizzie whose memories of that morning flash in scattered fragments. Had she been in the barn or the pear arbor to escape the stifling heat of the house? When did she last speak to her stepmother? Were they really gone and would everything be better now? Shifting among the perspectives of the unreliable Lizzie, her older sister Emma, the housemaid Bridget, and the enigmatic stranger Benjamin, the events of that fateful day are slowly revealed through a high-wire feat of storytelling.

Sarah Schmidt works as a reading and literacy coordinator at a regional public library. See What I Have Done is her first novel. She lives in Melbourne, Australia.
Loading...
or support indie stores by buying on