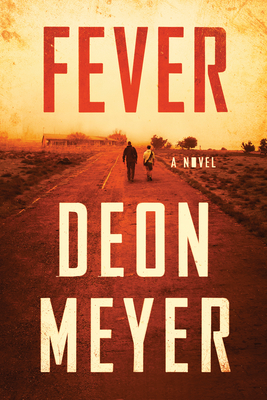 “Fever, which grabbed me from the beginning, takes place in South Africa several years after a devastating illness wipes out most of the planet. It starts as a thrilling survival tale between a brilliant father and his 13-year-old son and quickly evolves into a fascinating study of human nature and the perils of building a new civilization from scratch. The survivalist details throughout the novel are especially fascinating, as are the conflicts within the society as it grows. A dense, captivating read that drew me in and kept me hooked.”
— Elissa Englund (M), Bank Square Books, Mystic, CT
View the List

"Reminiscent of The Stand and The Passage. Great stuff."--Stephen King Nico Storm and his father, Willem, drive a truck filled with essential supplies through a desolate land. They are among the few in the world, as far as they know, to have survived a devastating virus that has swept over the planet. Their lives turned upside down, Nico realizes that his superb marksmanship and cool head mean he is destined to be his father's protector, even though he is still only a boy. Willem Storm, though not a fighter, is both a thinker and a leader, a wise and compassionate man with a vision for a new community that survivors will rebuild from the ruins. And so Amanzi is founded, drawing Storm's "homeless and tempest-tost"--starting with Melinda Swanevelder, whom they rescue from brutal thugs; Hennie Fly, with his vital Cessna plane; Beryl Fortuin and her ragtag group of orphans; and Domingo, the man with the tattooed hand, whom Nico immediately recognizes as someone you want on your side. And then Sofia Bergman arrives, the most beautiful girl Nico has ever seen, who changes everything. So the community grows, and with each step forward, as resources increase, so do the challenges they must face--not just from the attacks of biker brigands, but also from within. Nico undergoes an extraordinary rite of passage in this brand new world, testing his loyalty to the limits. Looking back later in life, he recounts the traumatic events that led to the greatest rupture of all--the murder of the person he loves most. Propulsively readable, Fever is a gripping epic of humanity striving for a noble vision against its basest impulses.

Deon Meyer is the internationally acclaimed, prizewinning author of eleven thrillers, including Icarus, Cobra, Seven Days, and the Barry Award-winning Thirteen Hours. His books have been published in twenty-seven languages. He lives in Stellenbosch, South Africa.
Loading...
or support indie stores by buying on