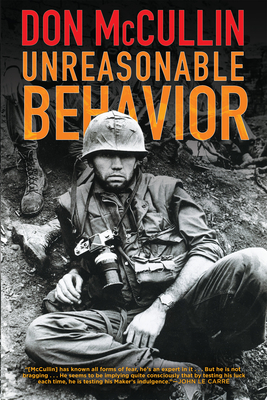 From the construction of the Berlin Wall through every major conflict of his adult lifetime up to the Syrian Civil War, photographer Don McCullin has left a trail of iconic images. Revised and updated after twenty-five years, Unreasonable Behavior traces the life and career of one of the top photojournalists of the twentieth century and beyond. Born in London in 1935, McCullin worked as a photographer's assistant in the RAF during the Suez Crisis. His early association with a North London gang led to the first publication of his pictures. As an overseas correspondent for the Sunday Times Magazine beginning in 1966, McCullin soon became a new kind of hero, taking a generation of readers beyond the insularity of post-war domestic life through the lens of his Nikon camera. He captured the realities of war in Biafra, the Congo, Vietnam, Cambodia, and the human tragedy of famine and cholera on the Bangladesh border and later, the AIDs epidemic in Sub-Saharan Africa. McCullin now spends his days in a Somerset village, where he photographs the landscape and arranges still-lifes. Harrowing and poignant, Unreasonable Behavior is an extraordinary account of a witness who triumphed over the memories that could have destroyed him.

Don McCullin grew up in north London. He worked for the Sunday Times for eighteen years and has covered every major conflict in his adult lifetime. The finest British photojournalist of his generation, he has received many honors and awards including the CBE. He received a knighthood in the 2017 New Year honors list. He lives in Somerset.
Loading...
or support indie stores by buying on