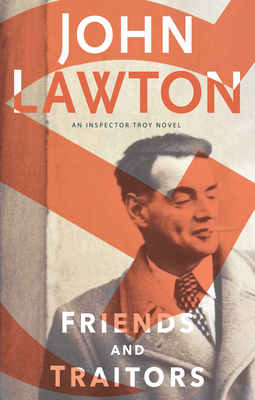 John Lawton's Inspector Troy novels are regularly singled out as a crime series of exceptional quality, by critics and readers alike. Friends and Traitors is the eighth novel in the series--which can be read in any order--a story of betrayal, espionage, and the dangers of love. London, 1958. Chief Superintendent Frederick Troy of Scotland Yard, newly promoted after good service during Nikita Khrushchev's visit to Britain, is not looking forward to a European trip with his older brother, Rod. Rod has decided to take his entire family on "the Grand Tour" for his fifty-first birthday: a whirlwind of restaurants, galleries, and concert halls from Paris to Florence to Vienna to Amsterdam. But Frederick Troy only gets as far as Vienna. It is there that he crosses paths with an old acquaintance, a man who always seems to be followed by trouble: British spy turned Soviet agent Guy Burgess. Suffice it to say that Troy is more than surprised when Burgess, who has escaped from the bosom of Moscow for a quick visit to Vienna, tells him something extraordinary: "I want to come home." Troy knows this news will cause a ruckus in London--but even Troy doesn't expect an MI5 man to be gunned down as a result, and Troy himself suspected of doing the deed. As he fights to prove his innocence, Troy is haunted by more than just Burgess's past liaisons--there is a scandal that goes up to the highest ranks of Westminster, affecting spooks and politicians alike. And the stakes become all the higher for Troy when he reencounters a woman he first met in the Ritz hotel during a blackout--falling in love is a handicap when playing the game of spies.

John Lawton has written seven previous Inspector Troy thrillers, two novels starring Joe Wilderness, one standalone novel, and a volume of history. His Inspector Troy novels have been named Best Books of the Year by the New York Times, Los Angeles Times, and New York Times Book Review. He lives in England.
Loading...
or support indie stores by buying on