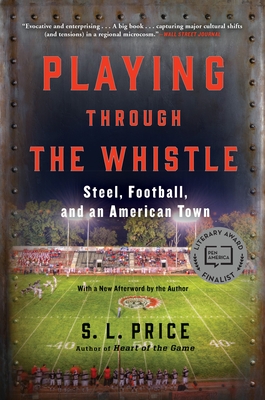 Playing Through the Whistle

Steel, Football, and an American Town

In the early twentieth century, down the Ohio River from Pittsburgh, the Jones & Laughlin Steel Company built one of the largest mills in the world and a town to go with it. Aliquippa was a beacon and melting pot, pulling in thousands of families from eastern and southern Europe and the Jim Crow south. The J&L mill, though dirty and dangerous, offered a chance at a better life and hope for the future. It produced the steel that built American cities and won World War II and, thanks to hard-fought union victories, made Aliquippa something of a workers' paradise. But then, in the 1980's, the steel industry cratered. The mill closed. Crime rose and crack hit big. But another industry grew in Aliquippa. The town didn't just make steel; it made elite football players, from Mike Ditka to Ty Law to Darrelle Revis. Pro football was born in Western Pennsylvania, and few places churned out talent like Aliquippa. Despite its troubles--maybe even because of them--Aliquippa became legendary for producing greatness. In Playing Through the Whistle, celebrated sportwriter S. L. Price tells the remarkable story of Aliquippa and through it, the larger history of American industry, sports, and life. Price charts the fortunes of Aliquippa's celebrated team through championships under charismatic coaches and through hard times after the mill died. In an era when sports has grown from novelty to a vital source of civic pride, Price reveals the shifting mores of a town defined by work--and the loss of it--yet anchored by a weekly game. Today, as our view of football shifts and participation drops, in Aliquippa the sport can still feel like the one path away from life on the streets, the last force keeping the town together. One of the most acclaimed sports books of 2016, Playing Through the Whistle is a masterpiece of narrative journalism and, like football, it will make you marvel, wince, cry, and cheer.

S. L. Price, a senior writer at Sports Illustrated since 1994, is the author of three previous books: Heart of the Game; Pitching Around Fidel, which was a finalist for the Los Angeles Times Book Prize; and Far Afield. He lives in Washington, D.C., with his family.
Loading...
or support indie stores by buying on