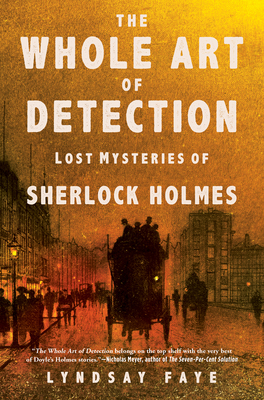 The Whole Art of Detection

"One of the best examples of Sherlock Holmes pastiche] that this die-hard Sherlockian has encountered . . . Faye perfectly captures the tone and spirit of the Conan Doyle originals."--Adam Woog, Seattle Times

Internationally bestselling author Lyndsay Faye has been enamored with the tales of Holmes and Watson ever since she was introduced to "The Adventure of the Speckled Band"--and later began to spin these quintessential characters into her own acclaimed works of fiction. The Whole Art of Detection collects the best of her Holmes tales written for the Strand Magazine and other publications, plus two new works. These fifteen brilliant stories span Holmes's career, from self-taught young upstart to lauded detective, both before and after his faked death over a Swiss waterfall in 1894. With Holmes and Watson encountering all manner of "scientific" spiritualists, poisoned wives, cunning relatives, plaid-garbed villains, and even a corpse horribly drained of all blood, this is a must-read for Sherlockians and any fan of historical crime fiction.

Lyndsay Faye is the author of five critically acclaimed books, including The Gods of Gotham and Jane Steele, both finalists for the Edgar Award for Best Novel, and Dust and Shadow, about Sherlock Holmes and Jack the Ripper. She lives in New York City with her husband, Gabriel.
Loading...
or support indie stores by buying on