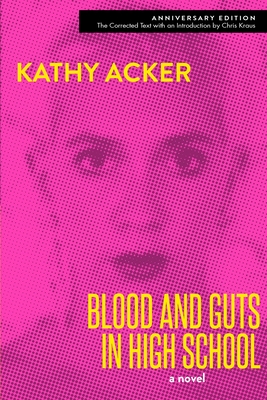 Blood and Guts in High School

A masterpiece of surrealist fiction, steeped in controversy upon its first publication in 1984, Blood and Guts in High School is the book that established Kathy Acker as the preeminent voice of post-punk feminism. With 2017 marking the 70th anniversary of her birth, as well as the 10th year since her death this transgressive work of philosophical, political, and sexual insight--with a new introduction by Chris Kraus--continues to become more relevant than ever before. In the Mexican city of Merida, ten-year-old Janey lives with Johnny--her "boyfriend, brother, sister, money, amusement, and father"--until he leaves her for another woman. Bereft, Janey travels to New York City, plunging into an underworld of gangs and prostitution. After escaping imprisonment, she flees to Tangiers where she meets Jean Genet, and they begin a torrid affair that will lead Janey to her demise. Fantastical, sensual, and fearlessly radical, this hallucinatory collage is both a comic and tragic portrait of erotic awakening.

Kathy Acker (1948 - 1997) was an influential postmodernist writer and performance artist, whose many books include Great Expectations; Don Quixote; Literal Madness; Empire of the Senseless; In Memoriam to Identity; My Mother: Demonology; Pussy, King of the Pirates; Portrait of an Eye; and Rip-Off Red, Girl Detective.
Loading...
or support indie stores by buying on