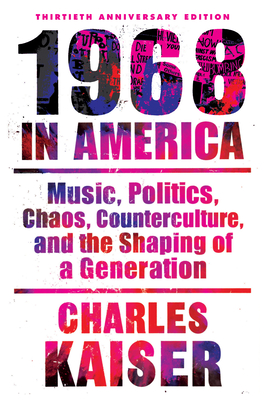 Music, Politics, Chaos, Counterculture, and the Shaping of a Generation

1968 was the year that defined the decade--Martin Luther King, Jr. and Bobby Kennedy were assassinated, unprecedented antiwar riots disrupted the Democratic National Convention, and the Tet Offensive in Vietnam changed the course of the war. With this political unrest came a breakthrough of American counterculture into the mainstream led by students and protesters alongside the voices of Aretha Franklin, Simon and Garfunkel, and Bob Dylan.

Charles Kaiser's 1968 in America is widely recognized as one of the best historic accounts of the 1960s. Largely based on unpublished interviews and documents (including in-depth conversations with anti-war presidential candidate Eugene McCarthy and Dylan), this is compulsively readable popular history. Now, fifty years later, and with a new introduction by Hendrik Hertzberg, it is even more clear that this was a uniquely terrible, wonderful, and pivotal year in the story of America.

Charles Kaiser has been a reporter at the New York Times, Wall Street Journal, and Newsweek. He is a principal contributor to the documentary 1968: The Year That Changed America and is the author of the award-winning The Gay Metropolis and The Cost of Courage.
Loading...
or support indie stores by buying on