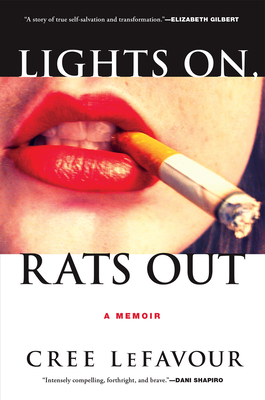 Lights On, Rats Out

A Kirkus Reviews Best Nonfiction Book of 2017
"Shockingly intimate."--
People Magazine "This gritty account of a woman's struggle with self-abuse describes nearly gothic suffering. It is also a love story about a dedicated and gifted analyst and his difficult but equally gifted patient. Courageous and unsettling, LeFavour's memoir is infused with humor and wry insight as well as pain."--New York Times "Eloquent, irreverent, graphically precise."--Vulture As a young college graduate a year into treatment with a psychiatrist, Cree LeFavour began to organize her days around the cruel, compulsive logic of self-harm. Her body was a canvas of cruelty; each scar a mark of pride and shame. The thrill of meeting with her psychiatrist, Dr. Adam N. Kohl--whose relationship with Cree is at once sustaining and paralyzing--comes to be the only bright spot in her days. A "memoir in a category of its own" (Dani Shapiro), Lights On, Rats Out brings us closely into these years, recounting a fiercely bright and independent woman's charged attachment to a mental health professional and the dangerous compulsion to keep him in her life at all costs. "Cree LeFavour uses the force of her blisteringly stark, mesmerizingly self-aware prose to not only unearth her own demons, but also equip the reader with the language to articulate our own as well."--Harper's Bazaar.com "A brave and honest memoir...sad and piercingly smart, making for an unforgettable read."--Bookreporter "Startling, beautiful language reminiscent of Plath."-- Booklist (starred review)

Cree LeFavour is the author of several cookbooks, including the James Beard Award nominated Fish, published by Chronicle Books. She has Ph.D. in American Studies and taught writing at New York University.
Loading...
or support indie stores by buying on