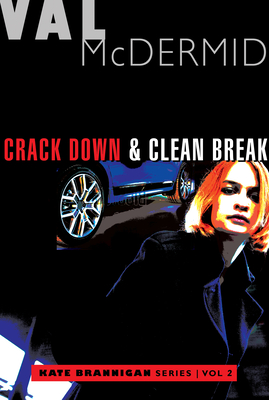 Crack Down and Clean Break (Paperback)

"Crime writing of the very highest order ... Kate Brannigan has turned into the most interesting sleuthess around" --The Times (U.K.)

There was only one reason Manchester-based private eye Kate Brannigan was prepared to let her boyfriend help out with the investigation into a car sales fraud nothing bad could happen. In Crack Down, Kate learns that once again with Richard you have to expect the unexpected.

With the unexpected being Richard behind bars, Kate seems to be the obvious choice to look after his eight-year-old son who proves even more troublesome than his father. She soon finds herself dragged into a world of drug traffickers, child pornographers, fraudsters and violent gangland enforcers, bringing her face to face with death in the most terrifying investigation of her career.

And in Clean Break, Manchester-based private eye Kate Brannigan is not amused when thieves have the audacity to steal a Monet from a stately home where she's arranged security. She's even less thrilled when the hunt for the thieves drags her on a treacherous foray across Europe as she goes head to head with organized crime. And as if that isn't enough, a routine industrial case starts leaving a trail of bodies across the Northwest, giving Kate more problems than she can deal with.

Cleaning up the mess in Clean Break forces Kate to confront harsh truths in her own life as she battles with a testing array of villains in a case that stretches love and loyalty to the limits.

Val McDermid's best-selling novels have won the Los Angeles Times Book of the Year and the CWA Gold Dagger and Cartier Diamond Dagger Awards. She is also a multiple finalist for the Edgar Award, including for Edgar Nominee for Fact Crime Forensics, which won the Anthony Award for non-fiction. She lives in Scotland.
or support indie stores by buying on
Copyright © 2020 American Booksellers Association