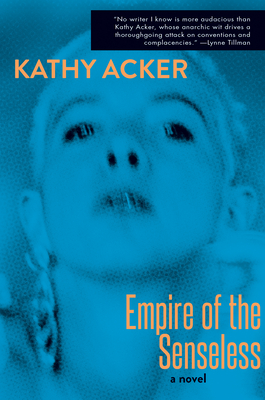 Empire of the Senseless

Originally published in 1988, Empire of the Senseless marked a turning point in Acker's wild, inimitable style. Considered one of her more accessible works, here Acker candidly addresses her lifelong obsessions: childhood and trauma, language and sexuality, criminality and corruption, oppression and rebellion. Abhor (part human, part robot) and her lover Thivai (a pirate) traverse Paris in a dystopian future, in search of a mysterious drug that Thivai needs in order to maintain his ability to love. Navigating the chaotic city, they encounter mad doctors, prisoners, bikers, sailors, tattooists, terrorists, and prostitutes, while a band of Algerian revolutionaries take over, and the C. I. A. plots to thwart them all. Sexually explicit, graphically violent, Empire of the Senseless resists the desensitizing of cultural consciousness and the disintegration of interpersonal communication. A timeless, prescient parable, it speaks profoundly to our social and political history as well as our present reality.

Kathy Acker (1944-1997) was an influential writer whose many books include Great Expectations; Don Quixote; Literal Madness; Empire of the Senseless; In Memoriam to Identity; My Mother: Demonology; Pussy, King of the Pirates; Portrait of an Eye; and Rip-Off Red, Girl Detective and the Burning Bombing of America.
Loading...
or support indie stores by buying on