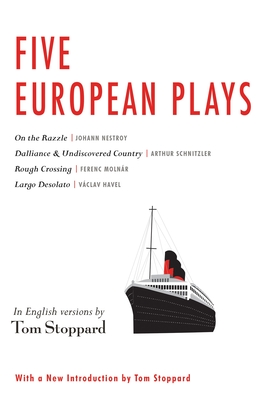 Alongside his many major plays, Tom Stoppard has written several highly acclaimed translations and adaptations of works by other writers, which are collected together here for the first time, together with a new introduction by Stoppard. Five European Plays includes adaptations of plays by four major European dramatists--Johann Nestroy, Arthur Schnitzler, Ferenc Moln r, and V clav Havel--Stoppard transports us to settings as diverse as nineteenth-century Vienna and the Czech Republic under communism. From the farcical humor of Rough Crossing, which follows two playwrights on a cruise ship who are struggling to finish a musical comedy before the ship docks, to the tender story of love and secrets in Dalliance, to the chillingly comic depiction of a writer working in Communist Eastern Europe in Largo Desolato, the plays reveal Stoppard as a master of technique, whose language shines in these translations and adaptations just as brightly as in his other works.

Tom Stoppard is the author of such seminal works as Rosencrantz and Guildenstern Are Dead, Jumpers, The Real Thing, Arcadia, The Invention of Love, Travesties and the trilogy The Coast of Utopia. His screen credits include Parade's End, Shakespeare in Love, Enigma, Empire of the Sun, and Anna Karenina.
Loading...
or support indie stores by buying on