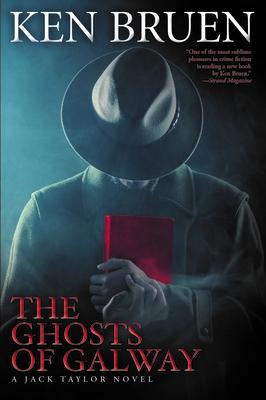 As well-versed in politics, pop culture, and crime fiction as he is ill-fated in life, Jack Taylor is recovering from a failed suicide attempt. In need of money, Jack has been hired as a night-shift security guard. But his Ukrainian boss has Jack in mind for some unexpected off-the-books work--getting his hands on what some claim to be the first true book of heresy, The Red Book, which is currently in the possession of a rogue priest hiding out in Galway. Despite Jack's distaste for priests of any stripe, the money is too good to turn down. Em, the woman-of-many-guises who has had a vise on Jack's heart and mind for the past two years, reappears and turns out to be entangled with the story of the same blasphemous book. As the novel twists toward a violent end, Jack is increasingly plagued by ghosts--by the disposable and disposed of in a city filled with as much darkness as the deepest corners of Jack's own mind.

Ken Bruen received a doctorate in metaphysics, taught English in South Africa, and then became a crime novelist. The critically acclaimed author of eleven previous Jack Taylor novels and The White Trilogy, he is the recipient of two Barry Awards and two Shamus Awards and has twice been a finalist for the Edgar Award. He lives in Galway, Ireland.
or
Buy Here
Copyright © 2020 American Booksellers Association