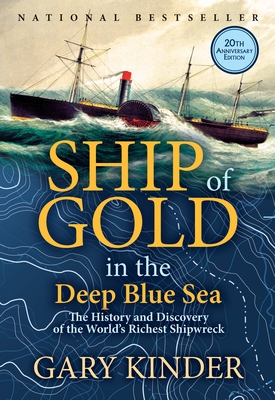 Ship of Gold in the Deep Blue Sea

The History and Discovery of the World's Richest Shipwreck

The 20th-anniversary edition of Gary Kinder's bestselling dramatic story of shipwreck, treasure lost and found, and a new chapter in deep-sea technology

From bestselling author Gary Kinder, Ship of Gold in the Deep Blue Sea is a "ripping true tale of danger and discovery at sea" (Washington Post), newly updated for this special 20th-anniversary edition.

In September 1857, the SS Central America, a steamer carrying nearly six hundred passengers returning from the California Gold Rush, was caught in a hurricane two hundred miles off the Carolina coast. Despite the heroic efforts of the captain and his crew, the ship, over four hundred lives, and twenty-one tons of California gold were lost. It remains the worst peacetime disaster at sea in American history. Combining historical adventure and scientific discovery, Gary Kinder re-creates the ill-fated voyage, and then tells the story of Tommy Thompson, a young engineer from Ohio who, in the 1980s, set out to be the first ever to work on the bottom of the deep ocean. As the target for his impossible quest, Thompson chose the wrecksite and fabled treasure of the Central America. Kinder chronicles Thompson's epic battles with naysayers, violent weather, experimental technology, the harsh environment of the deep ocean, and unscrupulous rival treasure hunters. The result is an extraordinary narrative of human drama, heroic rescue, scientific ingenuity, and individual courage.

Gary Kinder is the author of the bestselling books Victim and Light Years. He lives in Seattle with his wife and two daughters, where he has founded a technology company called WordRake, which creates editing software for writers and businesses.
Loading...
or support indie stores by buying on
(This book is on backorder)