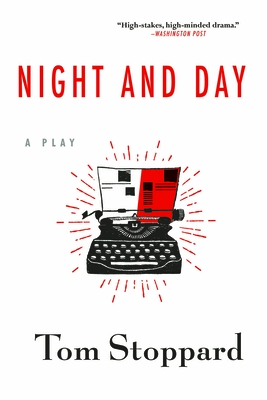 Tom Stoppard's stimulating, funny play Night and Day is set in a fictional African country, Kambawe, which is ruled by a leader not unlike Idi Amin. The nation is faced with a Soviet-backed revolution which quickly brings newsmen from around the world to cover the story. Using the characters Ruth; her husband, Geoffrey Carson, a mine owner; an Australian veteran reporter, Dick Wagner; and an idealistic young journalist, Jacob Milne, Stoppard pits the ideal of a Free Press against that of working-class solidarity. During the course of the play, each character is given an opportunity to make his case heard as the revolution unfolds. More traditional in style than most of Stoppard's oeuvre, Night and Day is a provocative and funny look at exploitation and corruption, journalistic ethics, freedom of the press, and marital infidelity.

Tom Stoppard is the author of such seminal works as Rosencrantz and Guildenstern Are Dead, Jumpers, The Real Thing, Arcadia, The Invention of Love, Travesties, and the trilogy The Coast of Utopia. His screen credits include Parade's End, Shakespeare in Love, Enigma, Empire of the Sun, and Anna Karenina.
Loading...
or support indie stores by buying on